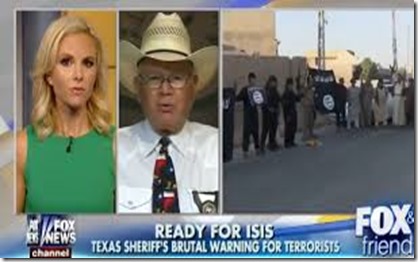 You think that guy to the left cares about China or ASEAN? Gimme a break.

This is a point I have made again and again on this blog: Asia does not activate the racial/cultural/religious paranoias of Americans, especially conservatives, evangelical Christians (who are around 45% of the country), and the GOP. This is why we won’t stop fighting in the Middle East. The ‘America is a Judeo-Christian country’ crowd absolutely wants to stay and fight it out against the jihadis, because it fears/hates them in a visceral way it never will feel about east Asian geopolitics. China may be threatening in a traditional, state-to-state kinda way, but that doesn’t move people’s deep fears/beliefs/angst though. But the idea that Muslims might bring sharia to the West, build a mosque near ground-zero, or see their holidays treated equally by Western public authorities is enough see a lot of Americans into a cultural panic. Hence the huge well of public opinion support to keep fighting and fighting in the Middle East.

This is what Huntington grasped a long time ago with the clash of civilizations, but China is too different for most Americans to get excited about in a personal way. But Islam does provoke Americans like this; just watch Fox. Its focus on Islam is relentless and astonishing. So yes, the long war is still the long war, and the Chinese can sit back and watch the GOP insist that the US fight endlessly in the Gulf.

The original essay is here; reprinted after the jump:

“The ‘pivot to Asia’ is the most important geopolitical shift in US strategy since the declaration of the ‘long war’ (against terrorism) after September 11, 2001.Yet try as it might, the US seems permanently bogged down in the Middle East. As Fred Kaplan noted, the campaign against the Islamic State of Iraq and Syria (ISIS, or just IS) has “already lost its way.” After just a month, the US already seems adrift; it is becoming painfully clear that America is once again fighting a Mid-East war with no clear goal, strategy, or exit pathway. There is growing talk of a ground intervention which would suck the US much more deeply into Iraqi, Syrian, and regional affairs. If this all seems familiar, it should. This has been the US way of war in the region for more than two decades.

Why is this relevant to the pivot? Because it illustrates a major US foreign policy trend I think will permanently hobble America’s ability to ‘rebalance’ toward Asia: the post-9/11 US seems simply incapable of abstaining from Middle East conflicts. The US foreign policy establish is deeply committed to the Middle East (for questionable reasons at best) and to the regular use of force there. As Martin Indyk put it in an article baldly titled “The Re-Pivot” (just a year after the ‘rebalance’ was announced): “Forget Asia. It’s time for Obama to put his focus back on the Middle East… Thank goodness President Barack Obama overcame his pivot penchant to Asia.” Even wars as obviously paranoia-driven, thrown-together, and only dimly related to US security as this anti-ISIS struggle, seem all but unavoidable. William Kristol captured this blasé, ‘of course we’ll be fighting in the Middle East indefinitely’ attitude perfectly when he famously said “we should just bomb ISIS for awhile and see what happens.”

Try as he did to avoid it, President Obama has been sucked into Syria, practically the definition of a quagmire. And Obama is arguably the most ‘restrained’ US president since Dwight Eisenhower. Almost all of his likely successors – both Democrat and Republican – are far more hawkish and interventionist than he. A President Clinton, Christy, Bush, and so on are far more likely to use greater force in Syria and Iraq, or against Iran, and otherwise deepen American regional involvement. One could easily imagine the US getting sucked into similar conflicts in the Middle East were similar state collapses to occur in places like Yemen, Jordan, Algeria, or even Saudi Arabia or Egypt (should Islamist insurgencies there materialize). In short, the US is constantly tempted to intervene in the Middle East, usually gives in to that temptation, and, in intervening so frequently, makes it that much harder to get out, much less pivot to another region.

On the face of it, a US pivot seems like an excellent idea, and if the US followed secular, rationalist, national interest criteria, it would indeed pivot. Looking at global regions, Asia pretty clearly outweighs the rest. Europe and Latin America are mostly democratic, fairly prosperous, and at peace. America does not need to be in these places in force, and it should not either abet Euro-free-riding or worsen its already bad history in Latin America. Restraint there serves US (and their) interests. Africa, sadly, remains a backwater of US interest, with no clear (national security) reason for an already overstretched US to do much. The Middle East, to my mind, is wildly overrated for the Americans. Like Stephen Walt, Andrew Sullivan, and even Thomas Friedman, I think it is fairly obvious, ten years after 9/11, that: the US relationship with Israel has become unhealthily close, almost obsessive; Islamic terrorism is a wildly overrated threat to the US which America risks worsening by the inevitable blowback to its constant action in the Middle East; and the United States should be moving toward alternative energy so that it can get out of the Gulf. In short, Europe and the Western Hemisphere are basically democratic peace zones, Africa is (sorry) irrelevant to US security, and the Middle East needs to be cut down to size in US foreign policy phobias.

That leaves Asia, and the reasons for attention should be blindingly obvious. Asia’s economies are growing fast, almost uniformly so. Even place like Cambodia and Vietnam are clocking 5+% growth now. Asian savers and banks fund the ridiculous US budget deficit and export lots of goods Americans buy. The number of people Asia has added to the global labor pool (2 billion in the last 25 years) has kept global inflation down for a generation (the largest ever one-time shift in the ratio of capital to labor). Asian markets are now major export destinations for American industries.

Next, there are a lot of Asians. This seems trite, but if you consider that there are only around 500 million people stretching from Rabat to Islamabad, but three times that just in India (!), you quickly get a sense that sheer demographics plays a role. Half the world’s population lives in South, Southeast, and Northeast Asia. And unlike many people in the greater Middle East, Africa, or even Latin America, these people participate in the global economy a lot – as low-cost labor, big savers, importers, exporters, etc.

Third, lots of people means inevitable friction, and lots of money means lots of weapons. Especially northeast Asia sometimes feels like Europe before WWI: big, tightly-packed, fast-growing economies; lots of money for bigger and bigger militaries; lots of nationalism and territorial grievances to create sparks. Regional conflict in Asia would dwarf anything since the Cold War. And specifically, China’s rise to regional hegemony would have very obvious security ramifications for the US.

So why is the Middle East such a draw? My own guess is US domestic politics. The large number of born-again evangelical Christians in the United States care deeply, theologically even, both for the fate of Israel, and for the struggle against terrorism, which is easily elided into a clash of civilizations with Islam. Asia has no such constituency: Asian-Americans are hardly activated on this issue, and most ‘pivoters’ are elites in government, journalism, or academia with little resonance with the public. Nor does Asia stir up the kinds of furious cultural anxiety that Islam does in the US. Confucianism or Hindudism, for example, mean little to most Americans, while ‘sharia in America’ is a regular theme on Fox News. This matters, ultimately, because without US public opinion and support for the pivot, it is unsustainable. Opportunity costs are real. If the US keeps fighting in the Middle East and American popular foreign policy imagery is dominated by that region, there will be less national power for and interest in Asia. And we can be sure the Chinese see this too.”

2 thoughts on “My November Diplomat Essay: If We can’t Stop Fighting in the Middle East, We’ll Never Pivot”