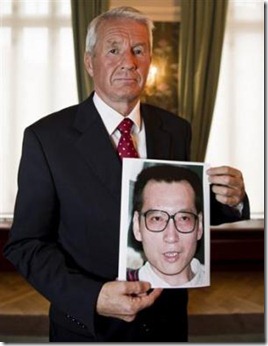 By now everyone one knows that Liu Xaibao won the Nobel Peace Prize. He is a human rights and democracy activist rotting in a Chinese prison, along with so many others, for laughable, ‘only-in-a-dictatorship’ crimes like ‘insulting the state and national dignity.’ He is most famous in the West for starting the ‘Charter 08,’ probably the most important liberal outburst from Chinese civil society in this decade (and a nice counterpoint to the ‘national humiliation’ nationalism otherwise showcased by the Chinese Internet). Predictably China was acerbic; it threatened Norway (!), because, of course, we all fear Norway rising and its rogue unilateralism. It is worth noting that the Norwegian government does not assign the prize; the independent Nobel Foundation does.

The flap tells us a few things:

1. I am not sure if we should laugh about the Norwegian threat (threatening the Green Nordics who give lots of development aid, have a globally envied living standard, and no military – lol) or lament (Chinese bullying now extends to NATO – yikes). But the Chinese overresponse fits its recent behavior in the South China Sea and toward Japan (as well as NK, I bet; it’s just behind the scenes, so we don’t see it), as well as its now system-threatening monetary interventions and downright bizarre head-in-the-sand denials about the Cheonan sinking. Now it is ok for rising powers to be tvetchy. We expect that. But if the Chinese keep up the bullying, then lots of westerners (think the Kagans) who can’t wait to label China a threat (in part because so many have predicted it) will claim that Chinese foreign policy has taken a major, and nasty, turn. For a long time, China’s claim to a ‘peaceful rise’ rested on its ‘Good Neighbors Policy.’ As Dave Kang has pointed out for years to the ‘China threat’ school, China has generally sought good relations with its neighbors. It has (previously at least) tried to settle border disputes peacefully (most importantly with Vietnam) and has generally sought to be a good institutional player in all those various East Asian semi-organizations like the EAS, ARF or the Six-Party Talks. US business lobby has generally used this to defend engagement with China, in an important pushback against the US military, especially the navy, which is both nervous (a possible peer competitor to break the Pacific-as-American-lake) and secretly hopeful (at last a symmetrical contestant we can understand! unlike all these noxious terrorists against whom our super-cool aircraft carriers are useless). In short, if the Chinese aren’t careful and step back here a bit in the next few months, they could find themselves seriously ringed in. Quick Prediction: the Chinese aren’t stupid. Unlike OBL, they don’t want to take on the whole world. They will pull back, and in six months we will be talking once again about the ‘unpredictable swings in Chinese foreign policy.’

2. I am pleased to see this issue back in discussion, after a decade of quiet. Everyone recalls what a big issue this was in the 1990s. I remember Jay Leno even once had a Chinese-American who had been arrested there on his show. And human rights (and labor) was the big stumbling block behind permanent most favored nation status for China under Clinton. Of course no one wants a war or another cold war, but it is also clear that western engagement can’t just be all flattering and desperate (please keep buying US bonds). Sometimes we need to push them hard on political change too. This is an obvious danger of mixed or contradictory signals – we want to work with you, but we will antagonize you too. But in fact, we do want both. When western governments push for change, it sends the Chinese off the deep end; hence neither Hillary nor Timothy Geithner challenge China on liberalization much anymore. In the end, Google too gave-in (rather disappointing that actually). But western NGOs like Nobel or Amnesty International can also send the other message – that our values are important, that we are genuinely uncomfortable dealing with dictatorships even if we don’t want a cold war, etc. So I think flaps like this, of the earlier Google one, are useful. They tell China that they are limits and expectations – mild, to be sure – that it will lighten up a little on the nationalism and repression. In short, after one experience with a superpower that stepped all over its people and bullied the neighborhood, no one wants to go through that all over again. And the Nobel reminds the CCP leadership of this.

3. Finally, after last year’s ridiculous Nobel choice, this year’s was smart and helps restore the Peace Prize’ good name. In fact, I bet the Foundation figured that after such a light, gauzy choice for Obama, credibility demanded a really tough choice this year. And few human rights cases are harder than China. Like most observers, I applaud the choice, but I am also glad, because I think the prize is a useful weapon in the struggle for human rights and liberalism. It shows up the glaring failures of places like Burma, apartheid South Africa, and China, and tells their elites that the West isn’t always looking the other way for business contracts. So here, here to the Foundation for such a strong choice. My quick choice for next year: Morgan Tsvangirai.