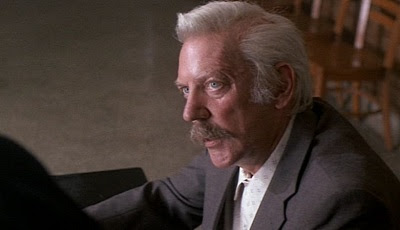 This is a local re-post of my monthly essay for the Lowy Institute for September.

In brief, I argue that Trump crossed a rubicon in August. He is now clearly unfit to be president. His behavior in August was so unhinged and inappropriate, that a 25th Amendment removal is now warranted. A white collar professional in any similar position of institutional authority – at a bank, school, hospital, military or government agency, etc. – would be removed for Trump’s August meltdown. So should Trump.

This will not happen of course. Republicans in Trump’s cabinet and in Congress clearly know he is unfit. Leaks like Rex Tillerson’s “he’s a f* moron” are common. But Trump voters’ bond to Trump is akin to a personality cult and they actually seem to approve of the chaos he has unleashed. So Washington Republicans won’t act. But still it is worth noting that they should. And why Trump voters have endorsed ‘burn it all’ is just beyond me. An ideological preference for Trump – however toxic and racist – is at least understandable. But what is the value is simply wrecking American governance?

So not only should the president probably be impeached for the obstruction findings of the Mueller Report, he should also be removed via the 25th Amendment for psychological unfitness. Never thought I’d that sentence. Wow.

END_OF_DOCUMENT_TOKEN_TO_BE_REPLACED

This is a local re-post of an essay I wrote a few weeks ago for the Lowy Institute. The argument is right there in the title: the GOP wants to keep talking like hyper-belligerent, threats-against-everyone neocons or Jacksonian America Firsters, but GOP voters don’t want anymore wars. So Trump’s rhetoric comes off hollow: he’s threatened war on North Korea, Syria, Venezuela, and Iran. But his voters are very opposed to more wars now. That is one of the ways Trump beat his GOP rivals. He denounced stupid wars. But GOP rhetoric hasn’t caught up to the base’s shift, and Trump is such a blowhard that he can’t help but make outlandish threats.

The result is that the GOP now sanctions everyone. It looks tough about avoids war. But in reality, GOP foreign policy looks increasingly incoherent. All threats and no follow through makes the US look like a paper tiger or just confused.

END_OF_DOCUMENT_TOKEN_TO_BE_REPLACED 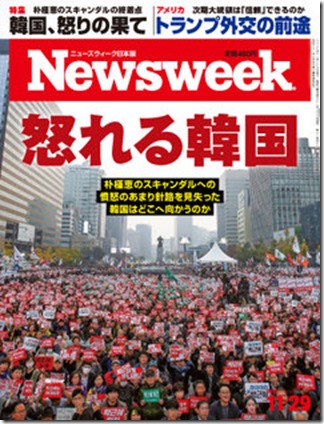 This is the English-language version of an article I just published with Newsweek Japan on Trump’s victory. I know there have been a million of these sorts of diagnostic analyses since he won, so this will be my only one. I will get back to East Asia politics next week.

I guess what worries me the most is how Trump toyed with proto-fascist themes, even if he himself doesn’t believe any of it. As I write in the main essay below: “He flirted heavily with race nationalism, illiberalism (attacking the media; winking to the alt-right), anti-democracy (refusal to recognize defeat; insisting the election system is ‘rigged’), and a cult of personality. That is awfully close to a fascist package.” Trump has now demonstrated that there is a constituency for hard-right strong man politics in the US. He ran as an openly misogynistic, racist, cultish candidate, and millions of Americans just didn’t care and voted for him anyway. This is the most important, and terrifying, revelation of the last 18 months.

No, I am not in hysterics that America is about to collapse. We’ve survived a lot worse in 230 years. I am pretty sure we can survive the Trump administration. He and his family will be epically corrupt, but that won’t bring down the Constitution. There is far too much hyperventilating on the left right now.

But if Trump, or more likely Steven Bannon, can put his stamp on the GOP, the American political landscape will change forever. The Reaganite GOP is disappearing, and in its place will rise a National Front-like nationalist-populist party if Bannon has his way. The US has never seen a blood-and-soil European rightist party. We may look back on Trump as a right-wing turning point even greater than the Goldwater or Reagan presidential campaigns.

END_OF_DOCUMENT_TOKEN_TO_BE_REPLACED

Cleon, demagogue of Athens during the Peloponnesian War and the archetype of democratic demagogue feared by conservatives like Thucydides, Plato, and Aristotle.

The following essay is a re-print of an op-ed I just wrote for the Lowy Institute’s Interpreter blogline.

Conservatives who plan to vote for Trump might want to consider for a moment just how much Trump violates the basic principles capital-C Conservatism cherishes: order; paced, digestible change; caution/pragmatism;  stability and moderation in leadership; robust institutions. It is hard to imagine Burke, Buckley, Kirk, Disraeli, and other Conservatives reading Trump as anything other than the type of demagogue political philosophy has long warned can be spawned by democracies in tumult. Just go read Thucydides if you don’t believe me.

I say this one inclined to such Conservatism. I worked for the GOP on/off throughout the 1990s. I am hardly a liberal, even if I am an academic. But if you can’t see the demagogic potential in Trump – the likelihood that he’ll use the law to pursue his enemies or enrich his family; his demonization of out-groups; his belligerent, apocalyptic tone – then you just haven’t been paying attention. Trump just proved that there is a potential for something like authoritarian, maybe even fascist, politics in the US, and that should scare the hell out of all of us.

END_OF_DOCUMENT_TOKEN_TO_BE_REPLACED 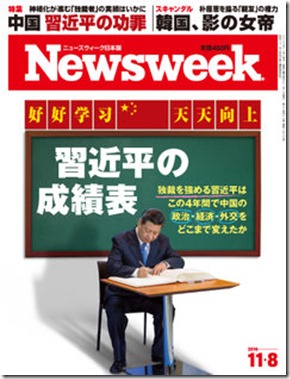 In the interest of ‘pundit accountability,’ I will post my thoughts about the upcoming US presidential election this week. It is a pretty open-and-shut affair this year. As Foreign Policy put it in an unprecedented presidential endorsement: “A Donald Trump presidency is among the greatest threats facing America, and the Republican standard-bearer is the worst major-party candidate for the job in U.S. history.” Yup.

The following op-ed is the English language re-print of my anti-Trump essay for today’s issue of Newsweek Japan. I’d like to thank my editor at Newsweek for allowing me to wander out of my area of northeast Asia to write about the US election. Normally, I wouldn’t do this, but this is not a normal election. Donald Trump represents an unparalleled threat to US democracy. He must be defeated, and I hope this op-ed helps that outcome in however small a way.

Finally, I don’t write this as partisan hackery. I am a registered Republican and have been my whole life. I worked for a Republican congressman, voted against Bill Clinton twice, gave money to a GOP candidate as late as 2002. I even interned for John Boehner way back in college. My ballot this year was split as I voted Republican in some Ohio races. I suppose I could have voted for Rubio. But not Trump. My god. He’s a terror. He’s not really a Republican as we thought of them at all until recently; he’s more like Marine Le Pen than anyone we know from the tradition of American politics. You think Nixon’s abuse of power was bad, just wait till Trump gets his hands on the Justice Department.

The essay is after the jump.

END_OF_DOCUMENT_TOKEN_TO_BE_REPLACED 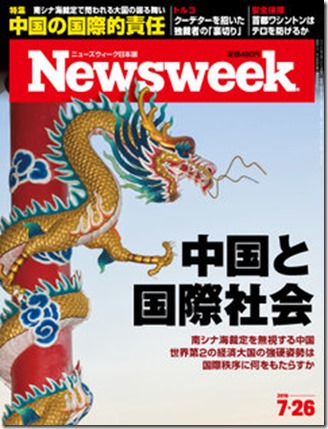 It’s the summer of Trump, so my July  monthly essay for Newsweek Japan (available here) is about him. I figure if everyone else can get on the Trump gravy-train, then I can too. For my specific thoughts on Trump and Asia, go here.

My interest is because I used to work in Republican politics in Ohio in the 1990s. I interned for John Boehner and later worked for a congressman. I’ve never really thought of myself as a Democrat, but the Republicans have gotten progressively more paranoid, anti-intellectual, and belligerent in the last 15-20 years. So now I am a ticket-splitting centrist, I guess – or at least I was until Trump came along. This is the first year I skipped a Republican primary, and I think the health of the republic requires a resounding Trump defeat this fall.

Anyway, this piece for Newsweek lays out what I think is the real impact of Trumpism. Given that Trump himself will likely lose and then disappear, his real impact will be that he opened new, white nationalist pathway to the GOP nomination, while demonstrating that GOP voters don’t actually care for the dated Reaganite agenda of the party’s Washington elite. So Ryan, McConnell, Laffer, and the rest now stand revealed as the emperor with no clothes as the nativists take over. Hence the next 4 years will be civil war between entrenched but unrepresentative Reaganites, and rising, insurgent Trumper nationalists. It is not clear who will win.

END_OF_DOCUMENT_TOKEN_TO_BE_REPLACED

This a re-print of an op-ed I just published with the Lowy Institute.

I’ve argued elsewhere that I don’t think a President Trump would pull the US out of Asia. That would requiring battling a deep Washington consensus of government officials, think-tankers, military, and the rest who strongly support a continued American presence out here. Trump is too lazy and too ill-informed to try that. So don’t worry about that. Nor will Trump win. So don’t freak out yet.

But I do think Trump has changed the GOP a lot, and that he will have successors. Trump just proved that the median GOP voter doesn’t give a damn about Reaganism. Republican voters are now lower middle class and downscale (whites), and they are not anti-statists who want tax cuts for the rich. Nor are they neocons (it’s their kids that fight the wars), nor are they social conservatives, as their rates of divorce, single parenthood, and substance abuse make clear. What they do want though is a dramatic reduction of immigration in order that the United States remain majority white longer.

In short, Trump has just showed the potential for the US to have a European-style nationalist-rightist party, complete with a whiff of fascism in Trump’s authoritarian posturing.

So my prediction is that: 1) Trump will lose, but 2) post-Trumpers will pop-up and try to use his message to win GOP primaries. This will ignite a serious civil war inside the GOP between the establishment – who are mostly Reaganites like Paul Ryan but who have weak roots among actual GOP voters, as Trump just illustrated – and white nationalist post-Trumpers who actually speak to issues the GOP base cares about. It’s not clear to me who will win, but the post-Trumpers have the votes and the passion.