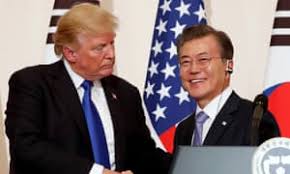 This is a local re-post of an essay I wrote this month for The National Interest.

I keep hearing this idea on the lecture and conference circuit in East Asia – that Trump wants to withdraw from South Korea and a second term would open that possibility.

The big problems for Trump, if he really wants to do this, are 1) US bureaucratic resistance, and 2) his own laziness and incompetence. That is, much of official Washington would oppose a SK retrenchment. Just as it did Jimmy Carter’s late 1970s effort to withdraw from South Korea.

But Trump is POTUS in a highly presidentialized system. He might be able to win the battle Carter lost, but Trump would have to really work at it – get on the phone, have face-to-face confrontations with the military, use the bully pulpit against the pundit network who would oppose this. But Trump is so lazy, and so uncomfortable with personal confrontation – this is why he fires people over Twitter – that I doubt he has the focus to push this.

Curiously though, Trump might find a sort-of ally in SK President Moon Jae-In. The SK left has long had an ambiguous relationship with USFK as ‘neo-imperialists’ bullying the ROKG. I doubt Moon’s leftist coalition would push back much if Trump tried to do this.

The full essay is after the jump:

It is now pretty widely accepted that the United States and South Korea are drifting apart on the central security issues of northeast Asia. Much of this is motivated by the unique leadership configuration of the two countries – an unconventional US president prone to see US allies as free-riders, coupled with a South Korean president deeply ambivalent about the US role in South Korea.

Their varying initiatives – sometimes coincidentally aligned, other times at cross-purposes – are pushing toward a reckoning. I keep hearing at conferences in East Asia, that the big break may occur if US President Donald Trump is re-elected. He may then feel free to go where he seems to wish to go: a US retrenchment from South Korea. And South Korean President Moon Jae-In, unable to much alliance enthusiasm among his own leftist electoral coalition, may offer little resistance. The US structure in South Korea may end more with a whimper than a bang.

The key to this scenario is Trump’s re-election. It is hard to imagine any of the Democratic contenders, should one become president, pushing for this. The Democratic party has no obvious animosity or policy problem with the US alliance with South Korea. Indeed, it is not clear that this is even an issue at all on the US left, unlike with Trump. Former President Barack Obama was supportive the alliance and put middling efforts into Korean issues such as North Korea’s nuclear weapons program. There is no reason to expect any of the Democratic contenders to wander far from the script, and they have not to date.

On the Republican side, it is Trump, of course, who has made the South Korean alliance a major issue. Were any other traditional Republican, like Mitt Romney or Mike Pence, the president, alliance antagonism with South Korea would likely not occupy much policy space. The traditional Reaganite GOP was supportive of US forward basing.

So Trump effectively stands alone in official Washington in his harsh criticisms of South Korea – such as calling Moon an ‘appeaser’ in 2017, demanding a revision of the Korea-US free trade deal, and repeatedly insisting that South Korea is ripping off the US on defense support. The notion that US allies generally – not just South Korea – are bilking the US is one of Trump’s deepest held beliefs. He comes back to this idea repeatedly.

Coupled with this is Trump’s much-touted ‘friendship’ with North Korea dictator Kim Jong Un. It is highly unlikely that Kim thinks the same way beyond the shallowest opportunism. But ‘friendship’ with dictators, especially Kim, is also a theme Trump comes back to again and again. The consequence of that friendship would be, in full, the unnecessity of US troops in South Korea. If the North is an American friend, at peace with South Korea, and a normalized state participating in the world economy, the US need not remain in South Korea. If Trump pulls a normalization deal out of Kim on his nuclear weapons and missiles, perhaps in desperation for a foreign policy ‘win’ for the 2020 president race, that could give Trump the political cover to next suggest a US withdrawal.

On the South Korean side, the relatively rare occurrence of a leftist president – for only the third time in South Korean history – opens a similar policy door. South Korea’s conservatives are quite traditional in their foreign policy beliefs – cold warriors opposed to North Korea, pro-American, pro-alliance, pro-trilateral cooperation with Japan, and so on. This is why the US, before Trump, generally found it easier to work with South Korean presidents from the right.

The South Korean left though has long been at best ambivalent about the US role. Like leftist parties in Europe during the cold war, there is a long tradition on the Southern left of seeing the US as imperialist, of reading US local bases as a form of neo-colonial imposition, of perceiving the conspiratorial hand of the Central Intelligence Agency at work in local government, of understanding the US alliance as provoking North Korea as much as re-assuring South Korea against it.

South Korea’s leftist foreign policy intellectuals have long dallied with the notion of expelling the Americans to pursue deep détente with the North, perhaps in a two-systems-one-country federation. They have also staunchly opposed US efforts to encourage trilateral cooperation with Japan. When anti-American protests have broken out in the past, their core usually came from the left.

So if Trump moves to withdraw in a second term – because he thinks South Korea is ungrateful or ‘scamming’ the US – he may push against an open door. The South Korean left will read, rightly to mind, US rhetoric about scams, rip-offs, cheap-riding, and so on, as exactly the sort of American hegemonic bullying it has long warned about. If Moon can re-make relations with the North to be those between two brother Korean states, rather than a cold war stand-off, who needs the Americans and their obnoxious, grasping president anyway?

I still think the likelihood of this is under 50%. The bureaucratic resistance among national security elites in both countries would be intense. And if Trump loses, this whole debate will end immediately. But still, this the most serious debate about the US presence in South Korea since President Jimmy Carter abortively suggested withdrawal in the late 1970s.

2 thoughts on “Does Trump Want to Withdraw from South Korea if He’s Re-Elected?”