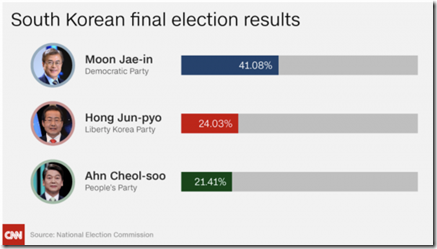 This is a re-post of my pre-election prediction piece for the Lowy Institute a few weeks ago.

It’s dated now of course, so you should probably read something else. But, I think I broadly got things right: Korea is a stalemated society. Neither right, left, nor center has a majority. So even though Moon won, he won’t govern far too the left. He does not have the political space to do it. He will be a social democrat, not a socialist.

The left won, but its combined total, 47%, is the same as Moon’s 2012 total. So the left missed a huge chance to cross 50%. Choi-gate was a once-in-a-lifetime chance for the left to prove it could win a national majority, which it has never done, and it failed. This is practically a smoking gun that the left cannot win a majority here, that South Korea is a center-right society.

The right ducked a huge bullet by coming in second. Had Ahn beaten the Liberty Korea party, LK might have faded into a largish third party as the People’s Party assumed the role of the head of the opposition. For much of the race, polling suggested this. Hong got very lucky, given the SK right is now a national embarrassment. They stuck with Park way too long into Choi-gate, and then Hong, in wild desperation, started calling himself the ‘Donald Trump of Korea,’ whatever the hell that means. Ech. The SK right’s time in the wilderness is well-deserved.

The center flopped. Ahn has been saying for 7 years that he could be president, and when he finally got the chance, he imploded. His debate performances proved how soft his support was. When he flamed out on TV, his voters fled. The question now is whether Ahn has a future at all in SK politics after such a dismal showing after all the hype. The answer is probably no.

The full essay follows the break:

After months of turmoil and confusion, South Korea will finally have a proper president next week. The South Korean presidential election will occur on May 9, and the legal inauguration will happen next day. At last, a legitimate leader can begin tackling the many issues of “South Korea’s dangerous drift.”

The impeachment of former President Park Geun-Hye means South Korea now only has an ‘acting president.’ The ‘Choi-gate’ scandal which brought her down has rolled on since October, paralyzing the government for months and necessitating this special election. Hence the rushed next-day inauguration, even if there is some later public ceremony: South Korea needs a fully empowered president as soon as possible.

Thankfully, the presidential campaign has been reassuringly bland and normal. There has been no last-minute constitutional tinkering, nor efforts by Park dead-enders to sabotage this in the name of the ‘real president.’ Park’s own party has accepted her impeachment and is running a candidate. As I argued last month in The Interpreter, for all the ‘crisis’ talk about South Korea’s recent troubles, it has weathered Choi-gate about as well as any democracy could reasonably expect. This election has should produce a properly legitimated president, and things should revert to normal in short order.

With a week to go in the campaign, the specific challenges to each major partisan current – right, left, and center – are increasingly clear:

The Korean right has all but collapsed. The Park-era conservative party desperately re-named itself and then factionalized over Park’s legacy. The two conservative candidacies refuse to merge, and their combined polling is around 20%. This is a partisan wipe-out worse than the post-Watergate routs of the Republicans in the US in 1974 and 1976.

This is not surprisingly. Park has badly discredited Korea’s traditional conservatives. Conservative voters have flirted with the centrist candidate, Ahn Chul-Soo, to block a liberal victory. But he imploded after several poor debate performances. Conservative voters now seem to be drifting all over the place. Some back to the right; some cleaving to Ahn; others staying at home. The liberal candidate and likely victor, Moon Jae-In, has even made a play for these dissatisfied conservatives by publicly denouncing homosexuality (which in turn has helped push up the far-left’s numbers as leftist voters have bolted).

All in all, a disaster for the right, which has led to a desperation move: the primary right-wing candidate is now calling himself the ‘Donald Trump of Korea.’ This suggests, along with Marine LePen’s advance into the French presidential election’s second round, that Trump is a possible model for new political entrepreneurs in democracies. Is this the route by which the post-Park South Korean right will reconstruct itself? Traditionally the right’s planks have been anti-communism and business friendliness. In practice, this has often meant mccarthyism and corruption. It is hard to imagine that a trumpified right is an improvement.

Moon, the overwhelming favorite now, will be a minoritarian president with a final total around 40%. This will likely constrain him from governing too far to the left on North Korea and Japan, which is probably the greatest anxiety of foreign observers of the election. Moon has prevaricated on the Terminal High Altitude Area Defense (THAAD) missile defense debate. He has hinted that he may re-open the Kaesong Industrial Complex. He was also a major architect of the Sunshine Policy under South Korea’s last liberal president. And he has criticized the ‘comfort women’ deal between Park and Japanese Prime Minister Abe Shinzo, as well as an intelligence sharing deal with Japan.

Moon’s instincts may be to push all these issues hard, but he will meet a wall of resistance, which his liberal predecessors did not. In 1998, when the Sunshine Policy was untested, it was worth a try. Today, given North Korea’s continual recalcitrance and norm-breaking – nuclearization, missilization, criminality, blatant provocations such as the sinking of the Southern warship Cheonan in 2010 or the use of VX, a weapon of mass destruction, in an airport, and so on – Moon will have to explain why North Korea is not the frightening global menace many now see it as. Why is Kaesong, which came to be widely understood as subsidizing dictatorship, suddenly no longer that? Why, if North Korea is building missiles, should South Korea not have missile defense?

Regarding Japan, Moon will likely be tougher on ‘history’ issues than Park. But here too, he will face a lot of resistance if he tries to undo the progress of the last few years. The easiest thing to do politically is attack Park’s Japan deals as conservative perfidy but leave them in place. Otherwise, his presidency will be hijacked by a return, yet again, of the Japan-Korea dispute. That was so bad a few years ago that it required direct intervention by the US president to tamp down. Moon can throw the leftist-nationalist NGOs the concession of not moving the comfort women statues in front the Japanese Seoul embassy or Busan consulate. But he likely has many other plans – chaebol reform, intelligence reform, air quality improvement, social services, North Korea – he would rather pursue than re-open the permanently stalemated stand-off with Japan.

Ahn Chul-Soo will probably lose, and he was always an unlikely candidate. A quirky celebrity businessman seeking office along the lines of Arnold Schwarzenegger’s run for the Californian governorship, Ahn briefly closed the gap with Moon as conservative voters abandoned the conservative parties. But he did not deeply appeal to them, because he markets himself as a modernizing reformer. Once he stumbled in the debates, they left him, and the gap with Moon re-opened.

If Ahn goes down in defeat, the big follow-on question is whether his centrist People’s Party will survive. It has always been, more or less, a vehicle for Ahn to run for the presidency, with only scant evidence of institution-building toward a genuine or durable party.

South Korea now has a far-left, center-left, centrist, and two center-right parties. Yet its electoral law is (mostly) first-past-the-post. Duverger’s Law tells us that this strongly incentives bipartism, unlike the multipartism South Korea has now. After next Tuesday, the two conservative parties will likely re-merge, as is already happening, and the People’s Party, with its not-so-charismatic-after-all leader in defeat, will likely dissipate over time. This would return South to a 2.5 party system (big-tent right, big-tent left, & small far-left parties). This would be yet more blandness in Korean politics – multipartism is always more exciting and interesting – but after months of confusion, some political boringness would likely be a good thing.