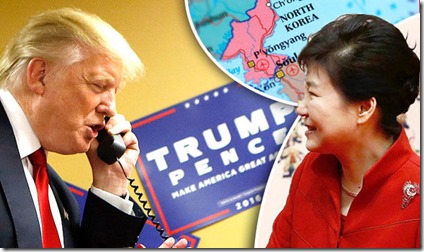 This is a local re-post of a piece I wrote a few weeks ago for The Korea Times. Basically my concern in the Trump period is, how will Trump and Moon Jae-In, the likely winner of the upcoming May 9 election, get along? Or not?

Trump doesn’t care about Asia, except for trade with China. His security concerns turn on Islam, and he was elected for that in foreign policy. His and Bannon’s clash of civilizations frame only works so-so out here. Huntington’s argument required putting China, Japan, and the Koreas into one Confucian civilization, but it was so obvious that they didn’t get along that Huntington was forced to pretend that Japan was its own civilization. Without this frame, I wonder if Trump the non-reader can figure out an approach?

The other thing which worries me is the burden-sharing fight. If Trump presents the ROKG with a bill like he did Merkel, the SK press will go ballistic. Trump might not care though, so ultimately I suggest that it would likely be a good idea for SK to pay a little more so that the issue can ultimately be dropped.

The election of Donald Trump as American president is likely a loss for South Korea, or at best a neutral event. The next four years will probably bring a US strategic disinterest in South Korea, and possibly a serious trade dispute. The US-South Korea alliance is unlikely to fracture – it survived the mutual loathing of the Bush and Roh administrations. But sensitive issues, such as Korean defense contributions under the Special Measures Agreement (SMA), and South Korean compliance with the Korea-US Free Trade Agreement (KORUS) are likely to divide the partners once again. This will incentivize Korean conservatives to improve relations with Japan, as occurred in the 1970s when US President Jimmy Carter and South Korean dictator Park Chung Hee fell out. Simultaneously the Korean left will reconsider relations with China.

One caveat to this prediction of course is Trump’s volatile personality and affinity for unpredictability. It is simply unclear how Trump will respond when North Korea inevitably insults him. That said, I doubt Trump will wander into the North Korean policy morass. Trump’s narcissism and laziness strongly suggest he will avoid intractable issues with few public opinion benefits, such the Israel-Palestine conflict or North Korea. A consensus seems to be emerging that Trump ‘must’ deal with North Korea. Reportedly, Barack Obama told him that it is the most pressing issue in US foreign policy.

I doubt Trump sees it that way. The North Korean threat to the United States is a function of America’s alignment with South Korea, and Trump has expressed much skepticism about US alliances. Were there no US-South Korea alliance, it is highly unlikely that small, poor, backward North Korea would have spent the enormous sums required to strike the continental United States (with an intercontinental or submarine-launched ballistic missile). Previous American presidents carried this risk because of a broad commitment to a global liberal order of which South Korea’s evolution from dictatorship to democracy was an outstanding example.

But Trump does not appear to care for such things. His speeches and Twitter comments evince little interest in US leadership of the community of democratic states. Trump himself, with his racism, insults, taste for revenge, hatred of the media, and so on, does not appear much motivated by political liberalism. It is easy to see him cutting deals, his preferred method of operation, with dictatorships without care for smaller states’ fate or US alliance commitments. He has already thrown NATO into doubt, and during the campaign, he flippantly suggested he would meet with Kim Jong Un.

Instead of a liberal community of friendly states, Trump seems to see US allies as burden. They are fleecing the US by not paying Washington enough. Free-riding is indeed an old problem in the US alliance network. American allies spend significantly smaller proportions of their GDP on defense than the US. Washington has complained about this for years. Trump seems poised to make this a major issue.

Besides slacking allies, Trump’s other favorite foreign policy hobbyhorse is trade and the ostensibly unfair trade deals the US enters. Trump has already signaled US withdrawal from the Trans-Pacific Partnership and a desire to renegotiate the North America Free Trade Agreement. If Trump holds this course, KORUS would be an obvious future target. It is one of the more important trade deals worked out under the Obama administration; it is new enough that it could be rolled back with only moderate difficulty; and it is with an Asian exporter. Trump has publicly criticized Asian mercantilism as trade cheating since the 1980s.

So what might South Korea do? The emotionally satisfying, and therefore mostly likely, response is to hit back at Trump tit-for-tat. The South Korean government and media will likely assail Trump’s free-rider and trade cheater critiques out of sheer nationalist pique. This is unwise, unless South Korea is ready to carry the costs of a major strategic reorientation, toward either Japan (for conservatives) or China (for the left). For although South Koreans dislike to hear it, their relationship with the US is asymmetric, which gives Trump enormous leverage. KORUS grants South Korean firms better access to the world’s wealthiest market, while the alliance adds substantial firepower, plus intelligence, surveillance, and reconnaissance capabilities, to South Korean defense at a very low cost. As North Korea is only a threat to the US because the US is in Korea, Trump could wield the obvious threat of a US withdrawal to extract concessions from Seoul.

A more diplomatic South Korean answer might be to make reasonable concessions, such as greater SMA payments and more committed KORUS implementation, in low-profile negotiations, while ignoring Trump’s public bluster. I imagine European leaders will do this as well. Much of the American establishment, including the military and business community, wish to retain the South Korean relationship. Also, Trump’s many conflicts of interests and outrages mean he may well be impeached or fail to be re-elected. Best to wait out the four year orange storm, rather than provoking Trump’s pride into a conflict where South Korea has much more to lose than the US.

3 thoughts on “South Korean Security in the Trump Era”