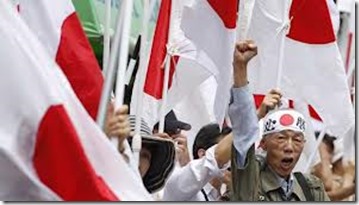 This is what happens when you write in the area of Japanese-Korean relations. Pretty much everybody hates you, because you don’t tell them what they want to hear.

The other day I posted how the Korean government leaned on me to alter the nomenclature in my writing – which, at this point, I wouldn’t do if only to oppose the highly inappropriate arm-twisting of academics by the state.

So obviously, I had to get some ken-kan from across the strait. Symmetric loathing of this blog is required!:

spread these videos, you failed idiot ! you kimchis are finished…

Needless to say, I didn’t write back.

I can’t access those videos. They are blocked in Korea, but judging from the comments, it’s pretty rank stuff, back to creepy comfort women-denialism and all that.

If I had to guess, that email was a response to this post where I criticized the creepy nationalists in the corners of the Abe coalition denying the comfort women. I don’t think Abe is as bad as Koreans do; there’s been a lot of irresponsible exaggeration in the Korea media, which seems to be finally dawning on the far-too-alarmist Chosun Ilbo. But I do broadly agree with the moral case Korea makes against Japan on the comfort women and Yasukuni. For as much as I think Koreans flies off the handle way too much on Japan, they are generally right on these two core issues. So I guess that makes me a ken-kan failed idiot or something.

I’ve been called a lot of things over the years in the comments and in hate-emails – a Muslim, a Sinophile, a traitor (to America and/or Korea), every variation of idiot you can think, an orientalist, an American imperialist, a racist (but that’s so de rigeur at this point in this area that it’s meaningless now), a mouthpiece of the IMF/USFK/the American national security state, and so on. But I gotta give this guy credit – a ‘kimchi propagandist’ is a pretty creative. Gotta laugh out of that one.

10 thoughts on “My Latest Japanese Hate-Mail: Apparently I am a ‘S— Kimchi Propagandist’ Hah!”