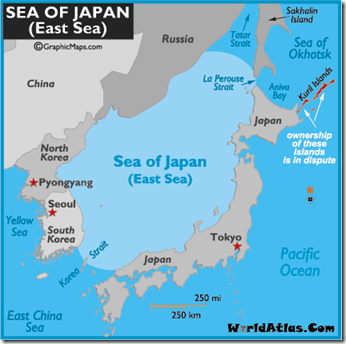 Did anyone else get this email below? Who wouldn’t be persuaded by some PR firm hack with no idea about East Asia giving suggestions she doesn’t understand by robo-email? Yuck. Maybe I’m reading it the wrong way – maybe getting yelled at by the Korean government about nomenclature means someone actually reads my blog. Hah!

I came across your Asian Security Blog and read your post, “Why don’t Korea & Japan Align?”. Because of your interest in current affairs and issues in Asia, our communications firm is reaching out, on behalf of the Korean Consulate General, to inform you about an issue that you and your readers need to know about.

The Republic of Korea is asking the US government and map publishers to use the name “East Sea” together with the “Sea of Japan” when referring to the body of water located between the Korean Peninsula and the Japanese Archipelago, over which both Japan and Korea have jurisdiction.  This body of water has been called East Sea for over 2,000 years – you can read the historical background here: http://bit.ly/EastSeaMaps

Why is this important and why should this issue matter to your readers?

* When dealing with matters of diplomacy, a name reflects how a country is viewed.

* Support for Korea’s position is gaining momentum among many internationally respected cartographers and the media. National Geographic, Rand McNally, The Economist, CNN, The Wall Street Journal, and Le Monde have all begun using both names concurrently.

* Other evidence of growing support for Korea’s position includes a vox populi petition to the White House with more than 100,000 signatures, and a vote at an international organization’s recent conference that denied Japan’s proposal to use only the Sea of Japan name.

Will you consider posting about this on your blog? Links to videos can be found at the bottom of this message, plus you can find additional information here: http://bit.ly/EastSea Please feel free to use any of this information found here in your postings.

Thanks, Robert! If you have any questions or need additional information, please feel free to contact me.

I find this ridiculous. Has anyone noticed how non-descriptive ‘East Sea’ is? At least the ‘Sea of Japan’ actually provides some basic geographic information (ie, a sea near Japan), while the ‘East Sea’ could be any sea east of anything else. To demand that the world use that term insists that the rest of the planet view bodies of water from a Korean perspective, which is a preposterous request. The name itself implies absolutely nothing. This is the US Government’s position also.

Should Israel demand the Arabian Sea be changed? Should Pakistan lobby the world to change the name of the Indian Ocean?  I have no idea if I have used the name ‘East Sea’ or not on my blog, but using an internationally accepted name is standard. I find this faux-controversy a fatiguing Koreanism, just like when Koreans insist on telling foreigners how old they are by their ‘Korean age.’ The ensuing confusion does little but gratify Korean insistence on uniqueness. Please, can we just stick to international standards and avoid self-flattering particularisms no one else cares about? Finally, it’s worth noting that there’s also the ‘Korea Strait.’ Should that be re-named the South Strait or something?Because this whole conversation will inevitably provoke a Japanese move on that name in response. Can’t we just drop this?