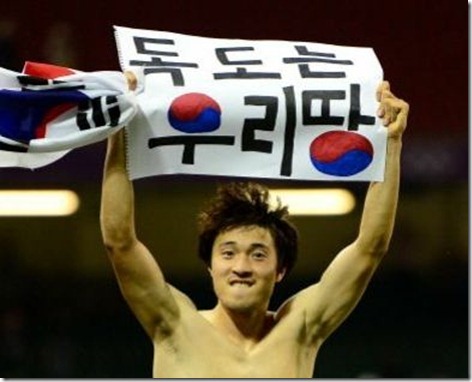 (I updated/lengthened the last section, after the jump, to respond to some of the criticisms made.)

Daniel Tudor, the Korean correspondent of the Economist (full disclosure: we are friends), just wrote a book on South Korea where he argues that Korea, despite all its success, is a discontented society. This is exactly right. (Here is a good review of the book.) Despite growing rapidly in just a generation, and capturing some global profile with things like ‘Gangnam Style’ or well-known products like Samsung gizmos, Koreans continue to have wildly unrealistic expectations of global interest in their small, linguistically unique (and difficult to learn) country culturally similar to enormous China. This generates constant geopolitical disappointment, per Tudor, and outsized sensitivities over foreign criticism – e.g., the widespread urban legend here that no Korean has yet won a Nobel Prize, because the committee is staffed by anti-Korean racists, or read this.

Four events in 2012 really seemed to capture the chip on the national shoulder, which ideally would serve to recommend a little modesty instead of yet more nationalistic grievance (but that won’t happen):

The Olympics: Some KOC official said on TV that Korea needs to ‘improve its Olympic diplomacy’ (whatever that means), even though it won a huge haul of medals for a country so small. India has more than 1 in 7 of the people on the planet, while Korea has .007%, but I guess the fifth highest pull of golds and ninth highest overall was a conspiracy of the Anti-Korean Olympics or  something. What is it with the endless chip on the shoulder? As Evan Ramstad put it, Korean officials once again had to come off sounding arriviste and aggrieved, rather than balanced and modern:

“Even so, a government sports official could be counted upon to again declare that South Korea was at last among the world’s great nations instead of recognizing that it has been there for awhile now. Second Vice Culture Minister Kim Yong-hwan was quoted in local media saying the performance in London meant that South Korea could “join the ranks of advanced nations in terms of sports and culture” and “has leapt into a higher level not only in the field of sports but also in culture and arts.”

And we had to spoil the Olympics too, with tiresome Dokdo posturing too (pic above).  That the placard violated the apolitical Olympic spirit is obvoious, but no major Korean figure came forward to denounce that action. *Sigh*

Dokdo: Ok, we get it. Koreans really, really, Really, Really, Really, REALLY feel like Dokdo belongs to them. I promise I get it. PLEASE. I really promise I get it. Don’t make me chop off my finger too. We all get it. I guarantee that every person I know in the expat community here in Korea knows also. Enough. And please, please stop manipulating young English teachers in Korea – desperate for acceptance and the appearance of local cultural literacy – into ‘supporting’ Korea’s Dokdo claim in the newspapers at some kimchi-making event or something. They’ve got no idea what they’re talking about; this is transparent agit-prop worthy of NK.

Do we really have to wreck years and years of NEA diplomacy over two rocks? Do we need amputated digits, flaming arrows shot and feces flung at the Japanese embassy, protests and all the rest? At this point, does anyone NOT believe that the ROKG shamelessly manipulates this issue? And now we are going to start a war over Dokdo? And samurai are going to lead the invasion? Seriously? Did I really just write that? Are we living on the same planet?

And you wonder why US officials think Korea is becoming “irrational”? It’s not to hard to figure out. And lest it need to be repeated yet again, the control of Dokdo has no impact over the distribution of sea resources around the islets, because human life is not sustainable on them without external assistance. This basic principle of UNCLOS, of which both Korea and Japan are signatories, means that sovereignty over Dokdo does not alter at all the sea border between SK and Japan. Resource control is the regularly used fig-leaf for Korea’s claim in the Korean media, but the real driver is unchecked, media-inflamed nationalism and japanobia (which MOFAT really should try to control; it’s starting to make Korea look like racists). Here are some of my earlier thoughts on the tangle over Dokdo and other island disputes.

Apple/Samsung: Even my grandmother could eyeball the iPhone and Galaxy phone and tell they more or less designed the same way. The California court that found against Samsung was shown emails in which Samsung employees were openly discussing their plagiarism of Apple designs; it only took them 6 hours to reach a verdict because the evidence is so obvious. As for Samsung’s ‘there’s only one way to make smart phone’ retort, gimme a break. Microsoft Windows Phone managed to create a phone and phone OS that doesn’t shamelessly copy the iPhone (and actually gets good reviews). I don’t know anything about phone tech, and even I can see these fairly obvious distinctions. (Read this for good break down of the creativity that went into the creation of the iPhone which provokes these sorts of ‘design patent’ fights.)

But the Korean media, ever inflammatory, unprofessional and fawning to the chaebol, has unloaded on Apple and US patent law as it if it’s a new form of protectionism aimed solely at Korea. That Koreans seemed to think the American court ‘choose’ Apple in the lawsuit because it’s an American firm, tells you more about how little impartiality Koreans expect from their own court system, than it says anything about the US legal system. Once again, intellectual property law is treated as if it’s a joke in Korea, land of the illegal download of just about everything.

And Korea accusing other states of protectionism? Are you serious? Come on. Is this real? Is the Korean media living in a fantasy world where decades of Korean tariffs and NTBs that made it a huge hassle for foreigners to operate here never existed? Park Geun Hye openly said during the campaign that foreigners should be prevented from penetrating chaebol ownership.

This is a nationalistic news bubble on par with Fox. Yes, US patent law is becoming a hideous tangle with ‘patent trolling’ and the rest, but intellectual property is big issue in the West. Asian companies will either find a way to work around this, or face endless lawsuits and trade friction, like this, or Microsoft’s herculean efforts to stop the piracy of Windows. This is just the beginning, and Korean companies are ill-served if a spineless media won’t report this. (For my longer treatment in the Newsweek Japan on the Samsung-Apple fight, click here.)

Lone Star: While the details of Lone Star have been endlessly rehearsed, it is worth noting the concerns the case raises. Lone Star alleges that it faced erratic, personalized regulation, politicized government intervention, an inflammatory local media, and widespread public opinion antipathy that resulted in street demonstrations. Yet Lone Star had done what many global portfolio investors do – provided a capital injection to a struggling firm at some risk to itself. If the Korean Exchange Bank had collapsed, Lone Star would have lost a substantial amount of money. Because KEB rebounded with Lone Star capital, KEB’s many employees retained their jobs, a high point rarely admitted in the Korean debate. Do not forget that KEB was headed toward bankruptcy, a mess the Korean government was desperate to avoid. Had the Korean government wanted to rescue KEB without foreign assistance, it might have nationalized the bank. It choose not to. That Lone Star then turned a substantial profit is not a flaw – it was the whole point of the investment. And there was a clear risk that the investment would fail, costing Lone Star its money, another point widely avoided in Korea. The local media insist the Lone Star was a ‘speculator’ because it bought at a low price and sold at a high one (meoktwi). But this is precisely what all global investors, including huge Korean institutional investors such as the Korean Pension Service, seek. Like any investment portfolio in the world, the whole point is to buy low and sell high, thereby maximizing returns. Clearly the Korean regulators knew this beforehand, and it is important that this basic principle be defended by the Korean government, both in fairness to foreigners who should not lose their WTO-guaranteed rights here, and to insure a continuing flow of job-creating foreign investment into Korea. (For my JoongAng Ilbo op-ed on the Lone Star meltdown, click here.)

I guess all this is just beyond the Korean media’s insistence on damning foreign capital funds that invest in Korea as rapacious asset-strippers: UK Hermes, McQuarrie, Dubai SWF. This is so bad now, that the international investment community shies away from Korea (the ‘Korea Discount’), and it is costing Korea are pretty big chunk of jobs.

I need a break. There are lots of reasons why Korea is a nice place to live, but boastful, hypersensitive nationalism worthy of the Tea Party is not one of them. I hope someone at MOFAT will take a look at the great satirical site, the Dokdo Times, to get a sense of just how far out the rest of the world thinks Korea can get on the conspiracy theories, xenophobia, and resistance to uncomfortable truths. Among others: 1. Racism is a huge problem here, from smirking teens and staring ajeossis, to ubiquitous laughter when foreigners try to speak Korean, through to genuinely serious discrimination against foreigner by landlords, employers, and in the courts. 2. The chaebol are rapacious, politics-corrupting, consumer-punishing, reverse-engineering oligopolists who’d have been broken up long ago anywhere in the West. 3. Minjeok pure-bloodedness is blatant empirical falsehood straight out of nineteenth century quack eugenicists and proto-Nazis like Houston Stewart Chamberlain.

All these points need to be made in the Korean public sphere, and ideally not by ‘culturally suspect’ foreigners like me. In the West, academics and public intellectuals often play a necessary adversarial role in beating back nationalist arrogance (i.e., Fox News). And I try to do my part regarding the embarrassing and creepy Tea Party. But I don’t see a similarly vocal classical liberal or left-critical intellectual class in Korea. Rather, Korean social science is very close to the state (this is a problem throughout Asia actually), which cripples its ability to provide a critical, truth-to-power voice.

Similarly, the Korean media is far too close to the state and large corporations. Where are the investigative/adversarial journalists and indie publications to make the case for a more modest, less hyperbolic national identity decoupled from race? Where are the Korean versions of Salon, the New Republic, the Atlantic, Mother Jones, or Frontline? Who is the Korean Glenn Greenwald, Andrew Sullivan, or Steve Walt?

Instead, you’ve got a media-landscape dominated by uncritical nationalist presentation that would rather lie than challenge cherished national myths. If Korea really wants to be a ‘culturally advanced country,’ how about breaking the media-state links that deprive Korea of interesting oppositional-critical voices? How about inviting someone onto Arirang TV that doesn’t just flatter and pander to Korean prejudices?

In any case, the Dokdo Times quips can be pretty humorous stuff:

“Worse, the probability of a samurai attack on Dokdo has been rendered self-fulfilling due to the detailing of the threat in the Korea Times, which has now invoked the K-logic principle of being true by virtue of being published in the Korean media.”

“While they have yet to be verified by peer review, K-Logic already appears to have proven that fan death really exists, kimchi cures cancer, native English teachers are all sex offenders and Dokdo is Korean territory.”

Paranoia is not healthy.

30 thoughts on “Korean Foreign Policy Year in Review 2012: So Many Grievances… (UPDATED in response)”