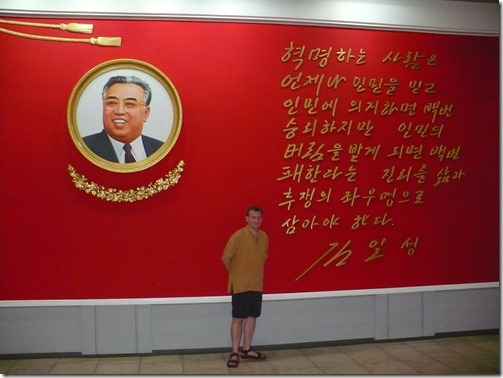 This is my final post about my trip to NK; here is one, two, and three. The post title comes from a remark a local guide made to me, and that is standard KIS image in the pic.

7. The Korean People’s Army is pretty much everywhere.

This is easily the most militarized state I’ve ever been in. Soldiers and other uniformed military are everywhere, and units of KPA were doing all sorts of even banal things, like going to the Pyongyang fun fair, together en bloc. Guards carried automatic weapons openly in public with disturbing frequency. And the KPA was pretty clearly a captive, exploited labor force. Again and again we saw KPA young men fixing roads, constructing buildings, working in the fields, felling trees, and doing all sorts of things with little connection to actual soldiering – and doing all these dirty tasks in uniform, looking very uncomfortable and overheated. Guides regularly told us about a ‘heroic, glorious’ KPA work brigade that built that or this, but all I could think of was how miserable those young men looked making bricks or hoeing a field in the August heat while in a uniform wholly unsuited for the job and probably getting paid zippo. This wasn’t the army – it was impressed labor in a workers’ state. Ironically, if there’s any one thing East Asia has in abundance, it’s construction companies; SK, Japan, and China love building white elephants. What a shame then to waste your 20s as semi-enslaved labor building a crappy highway for the KPA that no one will use anyway, because no one owns a car.

Another thing I kept wondering about is how long this whole ideological structure can lurch on, when everyday takes North Koreans further and further away from the actual life and exploits of KIS. In the first post, I noted that NK felt like a neopatrimonial absolute monarchy or even theocracy – mostly focused on the persons themselves of KJI and especially KIS as a Korean-communist version of Jesus. So if NK isn’t even Korea anymore, but the “Kim Il Sung state,” then how long can it hang on – or to be more specific, remain ideologically coherent – without KIS around? If the whole show is built around one or two guys, and they aren’t around, then isn’t there a time limit to how long such an ideology can actually remain convincing to anyone? For example, we saw students using computers at a university. KIS (d. 1994) never saw any computers and provided no guidance on them. So as computers become more common in even NK, how can that be connected to a personality cult whose traits are frozen in time, i.e., KIS’ lifespan, 1912-94?

This problem strikes me as inevitable for any highly personalized system. At some point everyone, even Stalin, dies; time continues to tick by; eventually new generations grow up for whom this stuff isn’t even a distant memory, it’s just ritual. Maybe the ‘KIS state’ can sorta work 18 years after his death, but what about 50 or 100 years? George Washington, a similarly lionized founder, may have been such an inspiration to early Americans that he was offered the kingship of America, but it’s hard to imagine a ‘George Washington state’ by, say, 1850. At some point, the sheer passage of time would undercut any such personalistic regime, no?

Maybe NK is aware of this, because it looks like they’re trying to replace one personality with another in the personality cult (KJU replaces KJI replaces KIS), but doesn’t that violate the basic premise of a personality cult – that one awesome personage (Hitler, Stalin, Mao) instantiates everything great about a certain national community? (If you’ve actually studied personality cults and their longevity, please chime in here). So instead of NK being a personality cult, I guess it’s now a ‘family cult’? Does that even make sense? Can that work if the latest guy in the family line has almost no accomplishments at all? At least, KJI had the nukes.

As the pics in this post show, KIS is everywhere, but he’s been dead now for almost 20 years. I guess that is not too far in the past yet, but inevitably it will be. Time marches on, and no matter what the regime does, eventually KIS will become a distant memory – a frozen almost mythic great leader, again like George Washington is to Americans perhaps, but not an actual present figure guiding the state. The personality cult of KJI was already a struggle and less convincing. KJI never equaled his father in terms of (real or apparent) successes, like struggling against the Japanese or founding the DPRK, and there aren’t nearly as many statues and such of KJI as there are of KIS. Is KJU just up to the task? I doubt it. People are mortal and can’t be institutions, no matter how powerful they are.

Similarly, the cult felt frozen because it rehearsed again and again for us the ‘glory days’ – KIS’ guerilla war against the Japanese, the founding of the DPRK, and the Korean war. (Not surprisingly, the propaganda wildly overblows KIS’ role in both the defeat of Japan and the creation of NK; there’s almost no mention of the American, Chinese or Soviet role in any of this. And apparently NK won the Korean war too.) So if you’re a N Korean, you really get it that KIS did some great stuff in the 40s and 50s. Ok. But what about the other 60 years since then? There’s almost nothing. What did KIS do in the 60s or 70s or 80s? I would have almost no idea judging solely by the statuary, the murals, the parks and locations we visited, the talks we got, etc., because it all focused on the independence struggle and the Korean war. (KIS smiling and pointing to a dam or the metro hardly compares with defeating Japan, and sheer volume of imagery of the latter over the former makes that pretty clear.) But the further in time these glories recede, the more it becomes stale no matter how much it gets mythologized. At some point, the past is past, and nothing we saw told me that NK has a strategy for the future. 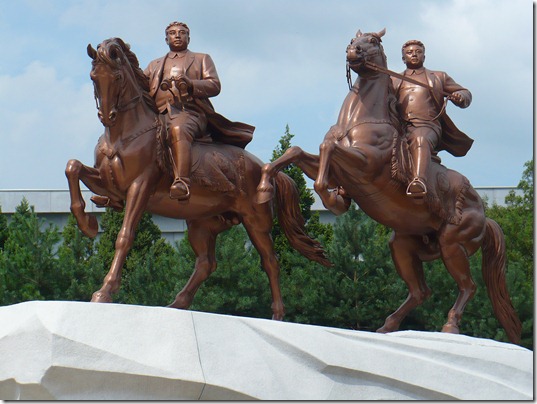 a. Just to reinforce just much NK really is the KIS state, NK runs an alternate ‘Juche Calendar’ whose point of origin is the year of KIS birth. So 2012 is Juche year 101. This was all over the literature we received.

b. Forgetting where I was for a moment, I asked our guides if they had email addresses so I could send some pictures. None of them had one. When we were showed computers (see we’re modern), they all ran on bootlegged copies of Windows XP, and the ‘internet’ was actually a NK intranet. No surprise there, but notable nonetheless.

c. Corn was planted in almost every accessible nook and cranny of the countryside. We saw it constantly – up and down in hills in crazy-quilt patterns, or in gullies and ditches next to roads at terrible angles – all of which will be pretty hard to access for harvesting. We took that to be a mark of just how food-desperate the country was.

d. Dilapidation was everywhere. We saw people starting trucks by cranking the engine with a crowbar (I don’t think I’ve ever seen that outside of the movies). On the Soviet-era plane we flew to Mt. Paekdu, the overhead bins had no doors. If we’d hit turbulence, imagine the bags flying all over the place smashing into people’s heads. Flush toilets outside of Pyongyang were a luxury. Beds were flat boards with a blanket on top. Brownouts and back-up candles were common; hot water was not. The roads were atrocious; everyone began to avoid the back of the bus.To be honest, it kept reminding me of traveling in southern Africa where nothing worked right and our drivers kept saying ‘TIA.’

e. I kept wondering what SK will do with all this commie stuff when they finally take over (and I do think NK will collapse one day). The historian in me says it’d be a terrible shame to rip it all down. It’s history, whether we like it or not and shouldn’t get airbrushed out. The political scientist in me says the opposite: tear it all down as symbols of possibly the worst government in the history of East Asia and get on with reorientation toward democracy. Tough question.