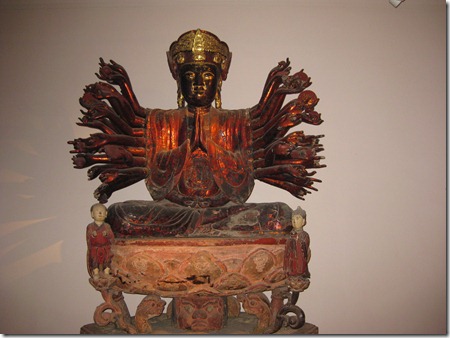 Here is part one, where I noted how much the communist super-idolization of leaders like Ho and Mao weirds me out. Here are a few more social science impressions from our trip:

4. The Indo-Sinic collision in Vietnam makes the local art the most interesting I’ve seen yet in Asia. The national museum of fine art has (above) a wonderful serene Buddha, with his hands clasped and face placid (fairly typical) – plus 30 arms. Wow! That stopped me cold: Buddha + Vishnu = I have no idea. I can only imagine how the monks back in Korea (my wife is a Buddhist) would react. But it is truly unique, and I find Confucian art with all its rigid, formal wise men telling me to be a good son kinda boring. Bring on the wild Champa statuary with bodhisattvas who look like Hindu gurus and dancers with their legs backwardly touching their heads. Awesome.

5. ‘Please, let me make your trip to Vietnam as un-Vietnamese as possible.’ Ech. What is it about tour companies and cultural insulation? We ate most of our meals in Korean restaurants; we meet the Korean ambassador who told us how the Vietnamese have a ‘Korean dream’ and love Samsung; they served soju at every meal; we were shuffled around to souvenir shops explicitly built for Korean tourists where you could buy stuff that you could get at any mall in Hanguk-land, the staff spoke Korean, and even the owners were apparently Koreans; we didn’t even have to exchange any money! I guess flying Vietnamese Airways and eating some spring rolls was a major concession.

6. A few other random thoughts:

a. I never saw a Buddhist-Taoist-Confucian ‘fusion’ shrine anywhere before; again the art in Vietnam was surprisingly unique and engaging. People were half-bowing, full-bowing, waving incense. It was pretty hard to know exactly what to do (three half-bows usually works pretty well).

b. What is it about communist states and concrete? Ech. It is so ugly and awful-looking. And it looks even worse and more out of place in the tropics. Mozambique and Vietnam look like the GDR in the jungle. The German Democratic Republic was architecturally hideous enough with its soulless, modernist-boxy, steel-and-concrete gigantism. Now drop that model into a third world tropical setting, and the outcome is even more awful-looking, not to mention dysfunctional and individuality-crushing. Vietnam and Mozambique both have terribly scarred their landscapes with countless square concrete box buildings that rise straight up out of the rolling green countryside. They don’t fit the locale at all, not mention that they are often only half-built and/or decaying from all the saltwater in the tropical air. It looks atrocious. Good god. Couldn’t the Soviets do anything right? Did they have to export even lazy, design-less concrete boxes masquerading ‘socialist realist’ architecture? Where’s Frank Lloyd Wright when you need him?

c. Remember your French textbook in high school telling you that Vietnam was in the ‘Francophonie’? Wrong. About the only French I could find was stuff left over on purpose. There were no exceptional signs or services. No one spoke it. I looked a lot. But English was the dominant foreign language. But there were almost no American tourists – about half Europeans and half Asians (Koreans and Chinese, no Japanese).

d. Yes, you can visit the Hanoi Hilton. Yes, it is extremely disturbing; you can even see the well-maintained flight suit John McCain was wearing when he was shot down and captured (another bizarre and uncomfortable tourist attraction). But post-Abu Ghraib, indignation feels hypocritical. It’s a very hard place to visit. The focus of the museum is on the French repression (complete with a preserved guillotine – very grim). Generally speaking, the Hanoi museums aren’t nearly as anti-American as you might expect. The ire is focused more on the French than us, and the bulk of the attention goes to Ho as a legendary founder like Lycurgus or George Washington.

I tweeted a series of these sorts of political science impressions from Vietnam here.