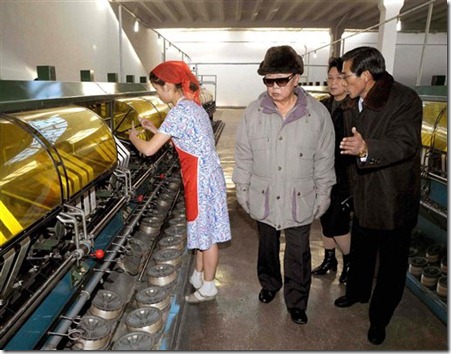 On-the-spot guidance, because the Dear Leader is apparently a baking expert also…

Part one is here.

So in the last week, Wikistrat, a consulting service I work with, ran a scenario to game out a sudden death of Kim Jong-Il. (The website set-up for this is kinda cool; take a look.) I have written a lot about this stuff before (here, here, here), but this useful exercise forced me to go on record about what I think will happen. Given Kim Jong-Il’s poor health and absolute centrality to the regime, his rapid passing would certainly provoke a systemic crisis. Some of the other scenario-gamers were even predicting war, internal dissolution, or foreign invasion! So here is my counterfactual run-through on what would happen if Kim Jong-Il died abruptly:

Kim Jong-Un will ascend to the throne, but he will increasingly be a figurehead for a military happy to retain its privileges and avoid South Korean courts.

Kim Jong-Un will likely rise into his father’s shoes, but there will be a great deal of jockeying behind the scenes. The son doesn’t have the regime connections of his father, nor the charisma and legacy of his grandfather. So he is likely to be more ceremonial than real, yet this is valuable in itself to the regime’s most important actors: the Kim family and the military. Jong-Un provides a face to the public that maintains the Kim family aura central to DPRK legitimacy. If NK simply becomes yet another dictatorship like Syria or Burma, then what is the point of a separate NK anymore? So a Kim III is a valuable fig eaf; he will not be eliminated; the regime will neither fall nor implode.

The real consequence of Jong-Il’s death will be increasing factionalization in the NK elite. The current system is a messy balance of competing interests including party, state, industry, the police state apparatus, the military – much like the USSR in the 70s. Sitting on top of this fragile balancing act is the extended, decadent Kim family. Jong-Il had the ability to balance these subnational competitors; Jong-Un does not; he’s too inexperience and too unknown in the relevant circles. Expect post-Jong-Il Korea to look like China late in Mao’s life or the USSR in the 80s: disintegrated, erratic, badly factionalized, with frequent subnational capture of national policy, unable to forge a coherent general will because of incessant twilight infighting.

NK will become yet harder for the neighbors to manage. Factionalization will generate inexplicable foreign policy behaviors that suit domestic actors while undermining further the coherence of the NK state. While this may accelerate eventual collapse, it also means more unprovoked outbursts like the Yeonpyeong shelling last year. China’s delicate position between N and SK will become yet harder. But for SK and Japan, it will be more of the same.

The new, more militarized regime will probably be more willing to bargain. Nuclear weapons have been Jong-Il’s signature achievement in an otherwise disastrous tenure; he cannot surrender them without undermining his legitimacy. This is why all the denuclearization talks go nowhere. With more generals and fewer Kims afterward though, it is more likely that the KPA (Korean People’s Army) will deal. Militaries tend to be a little less paranoid than long-standing dictators…

None that I can think of…

The earliest years of the transition will be the scariest. The new pecking order among the Kims, party officials, and the KPA will have to be worked out through nasty infighting, including likely purges. So the risks emanating from NK will initially get worse. The noveau regime is likely to pull some stunt in order to grab global attention, build domestic legitimacy (at least among the relevant Pyongyang elites), and shake down SK and Japan for yet more cash. But once the regime settles into its new SOP, its more militarized character will likely restrain the dangerous hijinks associated with past Kim family megalomania.

I think a civil war is highly unlikely. While the elite will skirmish for rank in the new system, none of the power-brokers wants to risk state implosion. SK still has the death penalty. Post-unification courts will hang much of the top leadership. These guys don’t want to go out like Mussolini or Ceausescu. They like the highly luxurious lifestyle, and they are terrified of a ‘truth and reconciliation’ process post-unification.

Business as usual is unlikely because NK, like Mao’s China, is highly personalized around the two Kims. Yet the next Kim hardly has the weight of his predecessors, leaving a huge hole in the middle. Jockeying to fill that gap seems inevitable. If NK is effectively a ‘Kim-state’ built around a cult of personality, then when that personality dies, crisis and change is inevitable. Both the USSR and China changed dramatically when their god-leaders, Stalin and Mao, passed. It seems likely NK will evolve.

NK will not implode. We’ve been predicting this for years: after the Cold War ended (1990), after Kim Il Sung died (1994), after the famines (1998), after the Axis of Evil speech (2001), etc. It doesn’t happen. NK has turned out to be a lot more durable than anyone expected, probably because it is willing to tolerate barbaric levels of repression. This year, the Egyptian military ultimately proved unwilling to shoot its own people; the KPA has no such compunction. The big question that no one can answer now, is, will the next Kim be so thoroughly harsh as his predecessors; the regime in its current form depends on it.