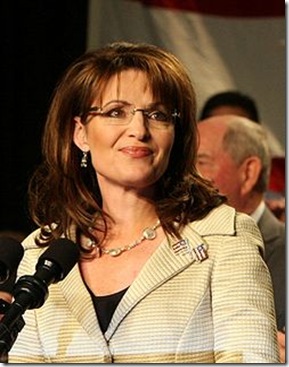 So yes, we all know that Palin is a balloonhead. Even the conservative-realist Foreign Policy gave thanks on Thanksgiving that Palin has no access to US foreign policy making. I have given up reading the reviews. I don’t think anything could seriously convince me to read the book.

But Sam Tannenhaus really captures how Palin both channels and reflects the larger problem of right’s increasing abdication of seriousness about government altogether:

“On the campaign trail she discovered a power greater than public office: the power of celebrity,” writes Matthew Continetti, an editor at The Weekly Standard and the author of “The Persecution of Sarah Palin,” a book that combines besotted advocacy with an assault on the liberal media that “tried to bring down a rising star.”

“Greater than public office”: this phrase distills an emerging doctrine on the right, as its long-standing distrust of federal bureaucrats and costly programs careers off into full-scale repudiation of governance itself.

Yes, the logical end point of tea-parties, Fox News, the ‘Palin-as-serious-contender’ fantasy, the ‘Obama-as-Hitler’ trope, Rush, Beck, and all the rest of the 2009 conservative implosion is the growing recognition by the rest of the country that the right is not only unfit to rule, but increasingly unable to.

(Tannenhaus’ good book on recent US conservatism is here.)

4 thoughts on “The US Conservative Meltdown in One Sentence”